In the current digital world, we need manufacturing and industrial processes that get done quickly but with efficiency and high precision. Fiber laser technology has made this possible for most sectors including medical, manufacturing, mining, construction, food production, aeronautics, among others.

Carbon dioxide (CO2) lasers have been used to cut sheet metal since the 1980s. However, in recent years, fiber laser technology has emerged causing a major disruption in the metalworking market. This technology is seen to be a revolutionary and disruptive as it has affected operations in sheet metal fabrication in a positive way.

Fiber laser technology has advanced exponentially within a short time to ease the cutting of plates and metal sheets. Fiber lasers have achieved other thresholds that CO2 lasers have never achieved. You will find that the beam quality of fiber lasers is much better than some other laser types, below 6kW power level. 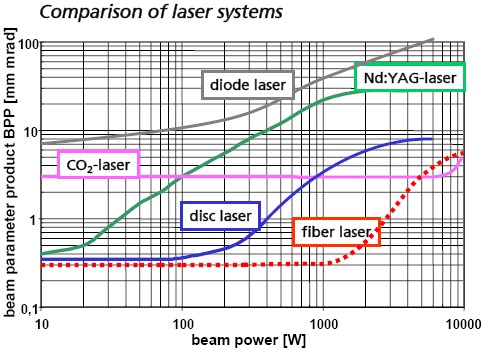 What is a Fiber Laser?

This is a laser that uses optical fiber as the active medium, which is made with rare elements such as erbium, thulium, ytterbium, holmium, praseodymium, or dysprosium. The type of rare earth elements used should not concern you much, the most important thing to know is that this laser machine uses optical fiber at its main component.

We can divide the lasers into the following categories through fiber types:

These are the most recent fiber lasers. They have a lower average power and high peak power, and are manufactured at a lower cost than continuous wave (CW) version. QCW fiber lasers are most suited for various industrial applications that require high peak power and pulse duration, such as, seam welding, spot welding and drilling.

They are designed to dislodge YAG lasers because of their necessary low up-front and maintenance costs. They are easily retrofitted into various systems, with multimode and single-mode versions available.

Manufacture of fiber lasers that are kilowatt-class and higher is done through the combination of various fiber lasers in single-mode, in parallel and then launch them via a step-index fiber that is in larger-core-diameter.

When it gets to this point, the laser ceases to be in single-mode, but the ensuing beam quality has better quality compared to other kilowatt-class lasers used commercially. The deviation of kilowatt-class fibers continues to improve as a result of utilizing high-power single-mode modules continuously.

These fiber lasers are found commercially up to 3000 Watts of output. The devices have continuous operation, but they can be adjusted to over 50 kHz. The adjusted mode allows the devices equal peaks to the average CW power. Emission leaves through a single-mode fiber that has an M2 below 1.1.

The profile is a task of single-mode fiber, instead of the thermal operating point, like it happens with traditional solid-state lasers; fiber lasers produce the same profile throughout the operating range. The adjustment is achieved through turning of the pump diodes on and off, which allows the device to be adjusted in single-pulse operation or at high frequency.

Contrary to the traditional solid-state laser, this fiber laser needs no warm-up time and operates in a variety of ambient conditions in a steady manner. The lasers have both linearly and randomly polarized outputs and can basically perform from 10-100% of targeted power without changing divergence or the ultimate focus spot diameter.

This type of fiber laser has numerous advantages one of them being that water is not necessary for cooling. It can also be deployed to the active medium through fiber without the requirement for alignment or extra bulk optics.

We could also classify the fiber lasers according to light emitting modes:

This is a laser that produces a continuous laser beam while observing controlled heat output, as beam intensity and duration. CW lasers mainly focus on high output and power; therefore, you will most likely find them in industrial settings.

The industries that mostly use CW fiber lasers are aerospace, electronics, and automotive, medical sector and semi-conductor industries. They are most efficient when laser cutting, laser drilling, and laser welding.

These refer to lasers that do not fall under the continuous wave classification. Their optical power is illustrated in timed pulses at a repetitive rate. Pulse lasers encompass a variety of technologies that address different motivations. Some of them are pulsed for not being able to operate in continuous mode.

In other scenarios, the application needs pulses to be produced that have as much energy as possible. As the pulse energy is equivalent to the standard power over the repetition rate, the goal is achieved by bringing down the pulse rate to build more energy between pulses.

In other instances, peak pulse power is used instead of pulse energy, particularly when obtaining nonlinear optical effects.

However, if we see from the light mode, we can also sort out fiber lasers into the following types.

The mode division multiplexing (MDM) systems utilizes restricted orthogonal modes within few mode fibers (FMF). They use this as an independent way to transmit information to multiply the system’s transmission capacity.

Few mode optical fiber applies varied modes to demonstrate a new level of freedom; the system’s spectrum efficiency can be successfully enhanced by FMF. Since FMF contains a huge mode field area, it has a better nonlinear tolerance than SMF.

This not only enhances the capability of optical transmission system, it also evades the nonlinear effects. MDM systems that are based on FMF can help in solving bandwidth crisis for single mode fibers in the future.

What is Fiber Laser Used for?

Fiber lasers are used in industrial materials processing in almost all low- and high-power markets, which include sintering, scribing, cutting and welding, marking, heat treating, and drilling. Single-mode lasers can accomplish high fluency levels and focus on micron-sized spots to change past beliefs that relate to process parameters.

The kilowatt level of the laser fiber has achieved higher speeds of welding and cutting than other technologies while operating under similar conditions. The fiber laser’s compact size, single-mode operation, and wavelength choice provide a variety of medical applications to the medical community.

The applications rely on particular fiber and wavelength delivery. The operation is maintenance-free, making it acceptable to doctors and other professionals working in the medical field.

Fiber laser is used in many complicated applications because of their many great qualities which include wavelength range, polarized and unpolarized emissions. Other factors are narrow line widths, single-mode operation, short pulse duration, compact size and disregard of environmental conditions.

How does Fiber Laser Work

As stated earlier, the main medium used in laser fiber is doped with rare earth elements, which in most cases, is Erbium. The reason for doing this is  to utilize the energy levels in the rare earth elements’ atom levels, which allow the use of a low-end diode laser pump source that still produces high output energy.

For instance, when fiber is doped in Erbium, an energy level absorbing photon with a 980nm wavelength decays to a meta-stable equal to 1550nm. This means that a 980nm laser pump source can be used to achieve 1550 nm laser beam with high energy, high quality and high power.

Erbium atoms function as the medium for the doped fiber, and the emitted photons stay inside the fiber core. To create the photon entrapping cavity, there is an addition of Fiber Bragg Grating. This is basically a glass section with stripes, where alteration of the refractive index occurs.

When light goes through a boundary between two refractive indexes, it refracts back a small amount of light. Basically, Bragg Grating enables the optical fiber laser to function like a mirror.

The pump laser focuses on cladding sitting near the fiber core, since it is too small to focus a low-quality diode later on. When the laser is pumped into the cladding near the core, it bounces around inside, and whenever it passes the core, the core continues to absorb more pump light.

How Long does a Fiber Laser Last?

Why JPT's Fiber Laser Source is so Useful?

Because of its wide frequency range with combinations of various parameters, there are many kinds of effects that can be done, and many materials are applicable. 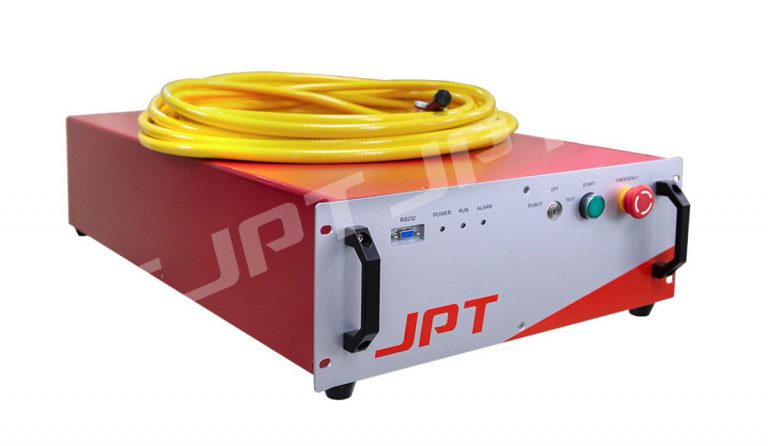 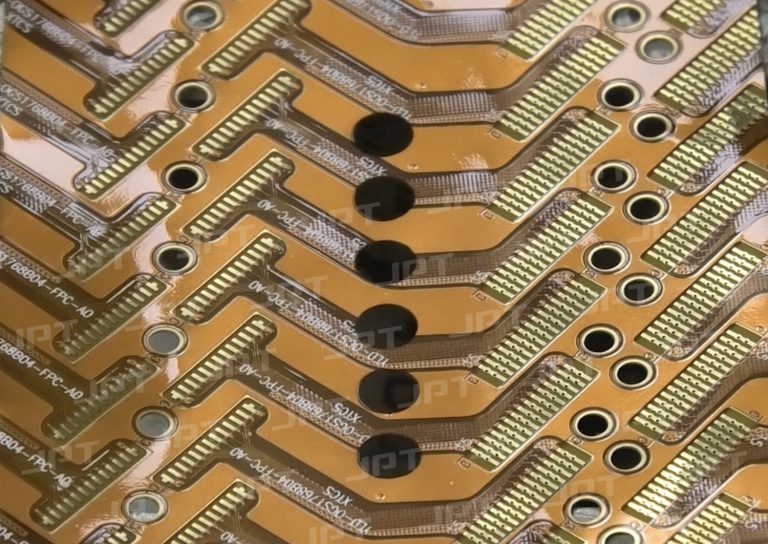 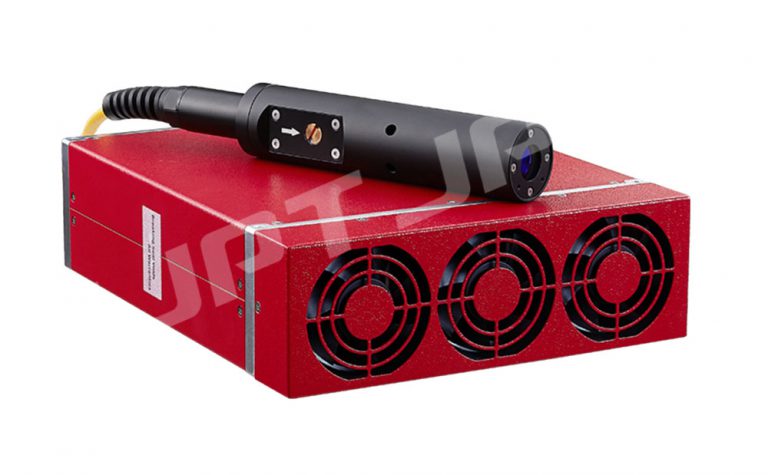 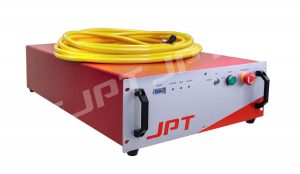 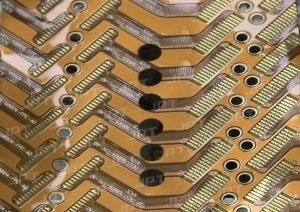 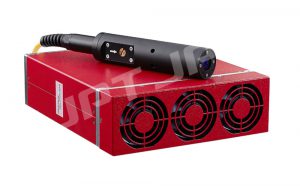 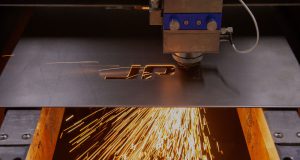 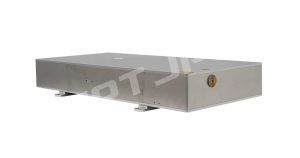 Ultrafast Lasers From-Basics to Its Applications