As is true with bulk solid-state lasers, transitioning from the use of dopedglass to the use of a doped single-crystal gain medium is an important step inscaling up the output power of individual fiber lasers.

Previous tested unclad SCFconfigurations have consisted of short (30–60 mm long) flood-illuminatedcrystalline rods with a 1-mm-or-less diameter in which the pump light bouncesalong inside the rod because of total internal reflection, but the modestructure of the output laser light itself is defined solely by the cavitymirrors—in other words, the SCF has not acted as a waveguide for the laserlight and is more a bulk than a fiber laser. 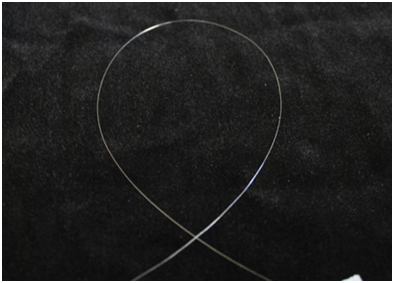 1 The SCF, which is 100 μm in diameterand 100 mm long with a 1% dopant concentration, was fabricated by ShastaCrystals using a laser-heated pedestal-growth (LHPG) technique potentiallysuitable for mass production of SCF (although it will require the developmentof a mass-producible crystalline cladding deposition method). The fiber enablesexperimentation and optimization of SCF.

In the experimental setup, a non-antireflection-coatedsection of SCF is sandwiched between two laser cavity mirrors—light from alinearly polarized laser diode emitting at 969 nm with a 3 nm bandwidth isfocused onto one end of the fiber, passing through the rear (dichroic) cavity mirrorand into the fiber. The fiber sits loosely in a V-groove to confine it withminimal physical contact, while a convex lens collimates the laser's output. Aconverging lens, a laser-line filter, and a laser power meter allow collectionof data on the laser output.

Since no thermal grease was used to drawheat from the fiber because of a resulting adverse effect on waveguiding, thediode pump was operated in a quasi-continuous-wave (QCW) mode at a 1% dutycycle to keep the fiber cool. The 1 ms pump pulse length is on the same orderof the upper laser level lifetime of Yb3+ in YAG, and so the experimentalresults are representative of CW operation—just at a reduced thermal load.

Various output-mirror reflectivitiesfrom 18% to 70% were tried, with the optimum reflectivity found to be 25%. Witha QCW pump input of 91.6 W (averaging out to a bit less than a watt because ofthe 1% duty cycle), the QCW laser output was about 53 W at a 1030 nmwavelength, showing that the fiber laser was efficient even in its unrefinedexperimental configuration.

As for the SCF parameters themselves,Giselle Maxwell, president and CEO of Shasta Crystals, explains that the 1%dopant level was determined by spectroscopy studies to help decide whatconcentration would provide the best conditions for lasing; the length of thecrystal was determined by the same spectroscopy studies, which determine howlong a crystal should be for a certain concentration of dopant to achievemaximum absorption of the pump beam and the most efficient lasing effect in thecrystal; and the diameter of the crystal was determined as a function ofconvenience for the user and what effect was desired (smaller diameters lead tobetter waveguiding).

"Next steps are to improve oncladding technology (mostly thickness of the cladding) to provide a trueall-crystalline double-clad single-crystal fiber that will beat the performanceof any double-clad glass fiber because of improved thermal conductivityproperties," notes Maxwell.